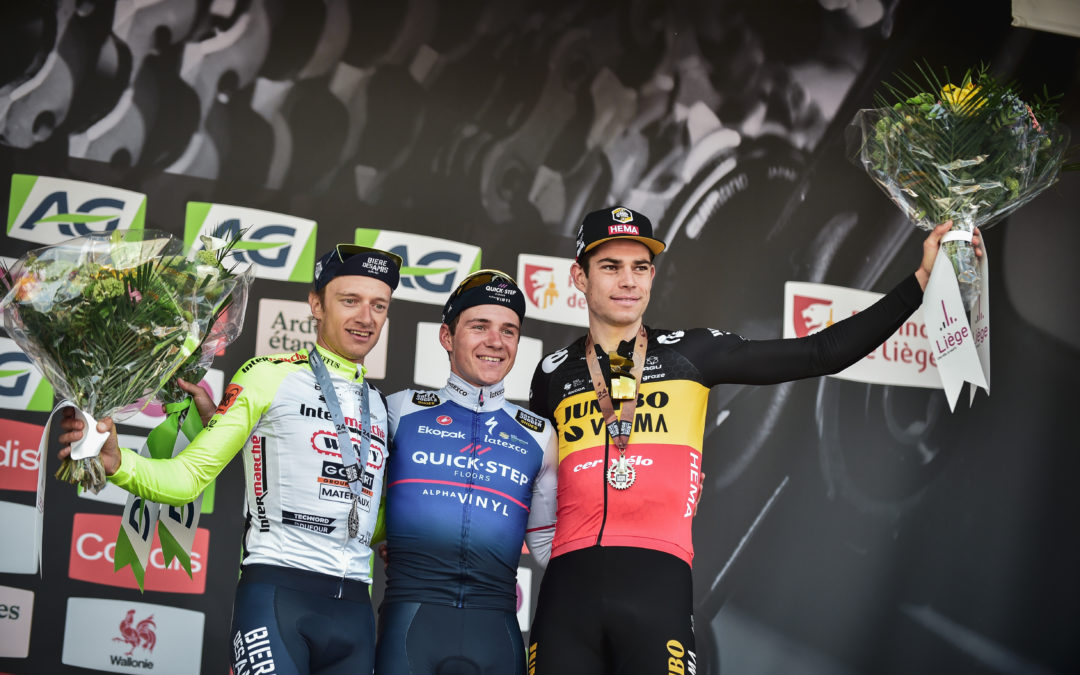 Eleven years after Philippe Gilbert, a Belgian won Liège-Bastogne-Liège on Sunday. Remco Evenepoel has indeed realized a dream by winning his first Monument. It was a victory built by increasing his advantage after his vicious attack on the Côte de la Redoute. No one was able to follow the 22-year-old rider, who ended as the winner of the Doyenne with a little less than a minute’s lead: “It’s my favorite race, it’s a dream come true,” he explained. “I am coming out of a difficult year and with this victory, I show that I have returned to the level of the very best.”

World Champion Julian Alaphilippe’s race ended when he was involved in a mass pile up 62 kilometers from the finish and suffered from pains in his back and shoulder blade.

Tour of the Alps: Bardet and Pinot, back to the fore

He had not won a stage race since the Tour de l’Ain in 2013. By winning the 45th edition of the Tour des Alpes on Friday, Romain Bardet (Team DSM) put an end to nearly nine years of scarcity. “It’s a very good week. It’s true that it was my return to competition, it went very well,” commented the 31-year-old rider, second in the 2016 Tour de France. “My sensations are good and there is a victory at the end, it’s magnificent!”

Second on Thursday, Thibaut Pinot won the last stage by taking the stage into Lienz in Austria. He also signals his return to form.

Winner of the Amstel Gold Race ten days earlier, the Italian Marta Cavalli won the 25th edition of the Flèche Wallonne on Wednesday. A member of the FDJ Nouvelle-Aquitaine Futuroscope team, she beat Annemiek van Vleuten (Movistar) to the top of the mur de Huy. The 24-year-old Italian savored this new success: “It was not easy because it is very steep. The first part, I stayed in the wheel of Annemiek. I waited for the last few meters, because that’s where you can make a difference.”

Alejandro Valverde thought that he may well, at almost 42 years old, have a sixth success at Flèche Wallonne on Wednesday. But Dylan Teuns deprived him of this happiness by winning for the first time in a major one-day race. The 30-year-old Belgian overtook the Spaniard some 200 meters from the top of the mur de Huy. “It’s incredible. I have always dreamed of a victory in a classic and it finally happens. I have always believed in my abilities,” commented the 30-year-old Belgian. “I was in the perfect position at the foot of the Mur. I knew more or less where Valverde planned to accelerate, he always does it in the same place. It was also a perfect place for me and I attacked there.”

English rider Finn Crockett (Ribble Weldtite Pro Cycling) won the 16th edition of the Rutland-Melton Cicle Classic on Sunday. In Melton, at the end of a 180 kilometer race, the 22-year-old rider won the sprint ahead of the Czech Tomas Kopecky (ABLOC CT) and his compatriot Jacob Scott (WiV SunGod).

Liège-Bastogne-Liège féminine: Van Vleuten does it again in Liège

Three years after her first victory, Annemiek van Vleuten (Team Movistar) won her second Liège-Bastogne-Liège on Sunday. Her attack on the côte de la Roche-aux-Faucons proved decisive. It is the fifth Dutch victory in six editions of the Belgian race. The Italian Marta Cavalli (FDJ Nouvelle-Aquitaine Futuroscope), in search of a hat-trick, finished in sixth place.