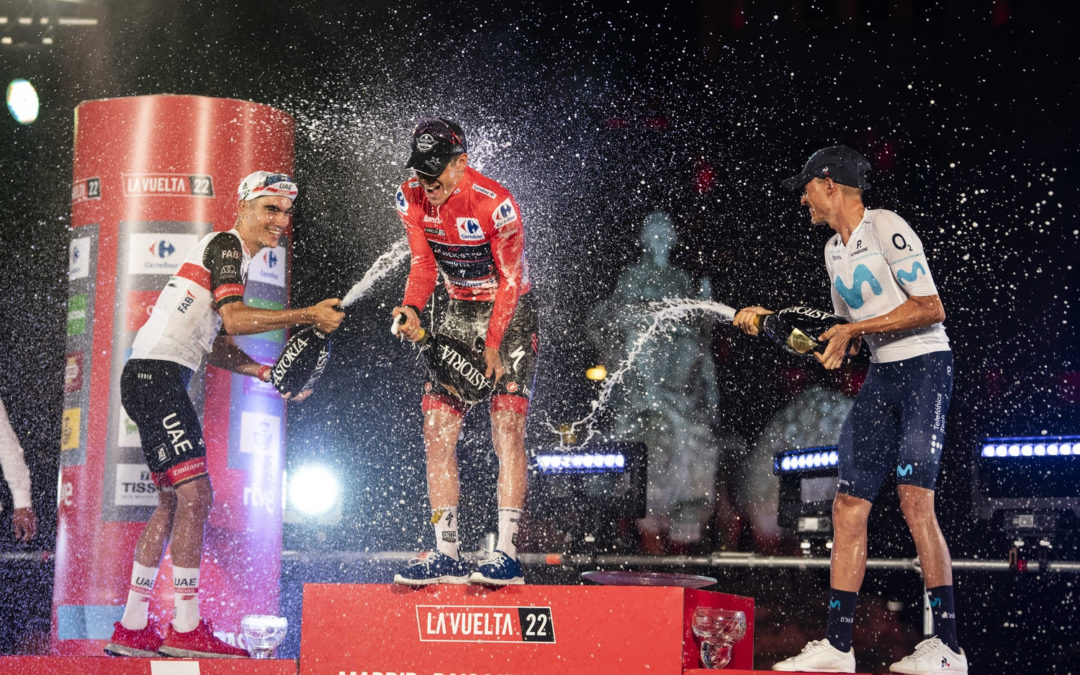 After Primoz Roglic (Jumbo-Visma) crashed which forced him to abandon the Vuelta on Wednesday while sitting in 2nd place on the general classification, Remco Evenepoel saw a boulevard wide open towards his final victory. The Spaniard Enric Mas tried to plant a few banderillas, but the Belgian perfectly contained the attempts of Mas, who had become the only real credible threat in the last week of the race. But since he took the red jersey at the end of the sixth stage in Pico Jano, Evenepoel has earned everyone’s respect as the real boss of the event (15 days wearing the leader’s jersey). Winner of two stages and solid in the mountains, Remco Evenepoel showed a mastery that we had not seen from him at an event of this scale. The 22-year-old Belgian succeeded in winning his first Grand Tour and thus earned himself a new status: “The Vuelta was a goal I had set myself and I managed to win despite the many criticisms I received after abandoning the Giro last year,” commented the Belgian. “It’s historic for my team, for my country, for me. I think we can be really proud of what we have done in the last three weeks.”

Mads Pedersen (Trek-Segafredo) succeeded in winning the green jersey thanks to his three stage successes.

At the top of the general classification after her victories at Sarras and Mont-Lozère (4th and 5th stage), the German Antonia Niedermaier will try this Monday to keep her leader’s jersey at the end of the last stage. With a 1’24 lead over Adegeest and 1’53 over Zanardi, winner on Sunday, it’s hard to see how Niedermaier could let the final victory slip away when the last stage which will finish in Privas presents few difficulties.

After the Giro d’Italia Donne and the Tour de France Femmes avec Zwift, Annemiek van Vleuten succeeded in winning the Ceratizit Challenge by la Vuelta on Sunday. These are the three biggest stage races on the calendar! In Madrid this Sunday, the 39-year-old Dutchwoman won the Spanish event for the second time in a row. She stamped her mark on women’s cycling a little more: “When you spend five weeks without competition and without being able to test your physical condition against that of your rivals, you always arrive at a race with some doubts, but I will be able to reach the World Championships serene and convinced that I am capable of maintaining the level with which I approached the Tour,” she commented.

The AG2R Citroën Team’s Benoît Cosnefroy, took his second World Tour victory in Quebec on Friday, a year after his first in the Grand Prix de Plouay. His attack on the Côte des Glacis two kilometers from the finish line was decisive.

“I came very close to winning the Amstel Gold Race, it was really very close, and that victory would have changed my whole season. Now winning in Quebec changes my season, taking it from average to exceptional. It’s so difficult to go for a win in the WorldTour… It’s fantastic to win a classic here, in Canada,” concludes Cosnefroy who comes from Normandy and rides for the team based in Savoy. He won ahead of Matthews and Girmay by four seconds.

They were among the favorites for the 11th edition of the Grand Prix de Montréal, and Tadej Pogacar (UAE Team Emirates) and Wout Van Aert (Jumbo-Visma) read their lines perfectly. Showing his power, the Slovenian beat the former Belgian champion in the sprint while Andrea Bagioli (Quick-Step Alpha Vinyl Team) took the third step of the podium.

Pogacar, double winner of the Tour de France, perfectly mastered his efforts during the 18 laps of a 221.4 km circuit. As a result, he posted his 14th victory of the season.

For the past few months, Caleb Ewan had been missing success and certainly a little form. But the Australian set the record straight on Sunday by winning the Grand Prix de Fourmies la Voix du Nord. He posted his seventh success of the season by sprinting ahead of the Dutchman Dylan Groenewegen (Team BikeExchange-Jayco) and the Belgian Amaury Capiot (Arkéa-Samsic): “It’s no secret that we’re chasing these points at this moment. I don’t know how many there are here (200, editor’s note), but for one-day races, it’s a lot. I’m happy to score them, but I’m even happier with the win. The team did a great job and controlled everything for me,” said the Australian.

In the women’s race, the Frenchwoman Clara Copponi (FDJ-Suez-Futuroscope) won after a race of 118 kilometers.